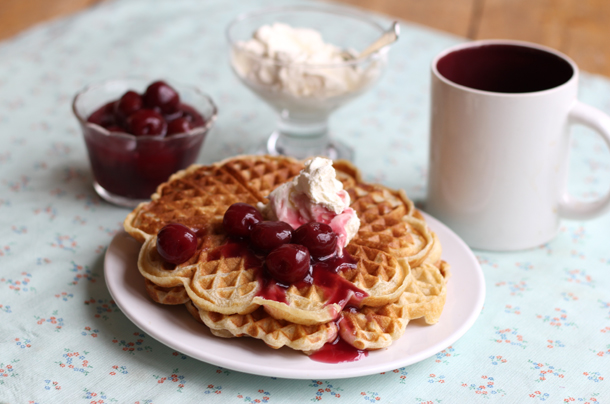 For today’s receipe I’m combining something from my recent American memories with my not quite so recent German childhood memories:

When I grew up in Germany, waffles were a special treat – a very popular one I might add. You could be sure that someone would have a waffle stall at any church or school fair and you’d always find them on Christmas Markets too. At home, most families also had waffle irons but they wouldn’t come out that much and certainly not as often as they seem to in the US where waffles are a bit more of a breakfast staple, such as pancakes. In America waffles are often eaten with maple syrup and maybe with some crispy bacon on the side. The fanciest way to eat waffles back home in Germany was with cherry compote and whipped cream – though more often then not us kids were just as happy to gobble them down with just a dusting of icing sugar.

This morning I combined an American buttermilk waffle with some typically German cherry & cream topping and it worked a treat. Served as a breakfast or brunch it looks pretty and impressive but the nice thing is, that it is super quick and easy to make!

For 10 waffles, which is plenty for 4 people and might stretch to as many as 6 depending on their appetite, you’ll need:

As with a lot of similar receipes, start by mixing the dry ingredients – the flour, sugar, baking powder, baking soda, and salt – with a spoon in one bowl.

In another, larger bowl mix the buttermilk, melted butter and eggs with a whisk then add the flour mix and combine all ingredients. Don’t over whisk the batter though, a few lumps here and there are fine.

For the cherries, add the fruits and juice to a pan and heat them up until the juices start to boil. In the meantime, mix the corn flour with an equal amount of water in a small cup and stir this mix in to the cherry pan, once their juice starts to boil. Keep stirring until the juice thickens, which will only take 2 minutes or so. If you like the juice to be thicker still, mix some more corn flour and water and repeat.

Heat up your waffle iron and set it to the desired browning strength you like you’re waffles to be baked at (if you haven’t used the iron before, check the manufacture’s recommendations) and get baking!

When I make waffles they get eaten pretty much straight out from the hot iron but if you want to bake them all first to serve them in one go, you can use your oven, set on a very low heat, to keep them warm.

Serve with the cherries and cream and tuck in!